You’ll be able to protect the village borders from large, dangerous wild animals, ensuring the productivity of other classes. You can sell off what you can salvage from carcasses

"With a weapon from the shops or Blacksmith, the warrior is set to begin defending villages and collecting loot."

Warrior is one of the 11 careers that can be assigned to a villager. It allows it to protect a village and find unique materials and

Furcash by fighting against monsters. A warrior can equip up to 8 different equipment, but it will always need at least 1 damaging ability in order to fight.

Warriors will start out at level 1, with a maximum of 500 health, 5 points in each stat, and 0 resistances. This could be increased or decreased by level up and/or equipping a piece of equipment.

By default, warriors will have 20 maximum charges, though how much they lose each time depends on the battlefield. When the health bar or the charges reach 0, the warrior will not be able to continue battling until both are regenerated above zero, which regenerates at 100 health and 1 charge every 5 minutes respectively, however this could be sped up by using items such as Chocolate Candycorns and Warrior Elixir, which restores health and charges respectively. The recharge time is static to the clock, meaning that the regeneration happens on every 5 and 10 minute mark. Recharge of health and combat charges also continues while a villager has another career, so long as they don't unlearn the Warrior career.

The following costumes give +5 maximum charges when applied to a villager of the Warrior career:

The following costumes give +10 maximum charges when applied to a villager of the Warrior career: 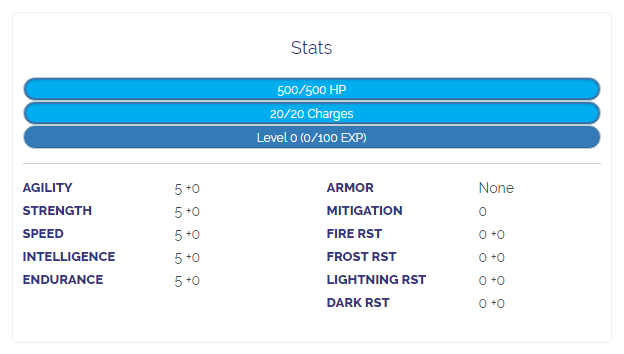 Stats of a new warrior 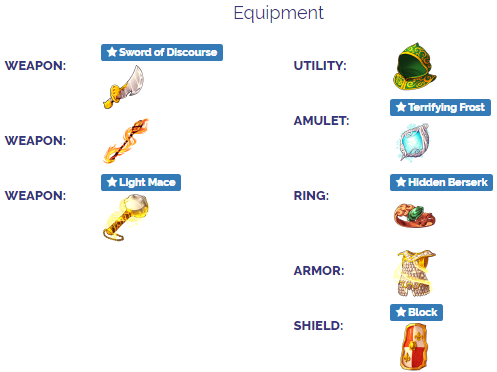 Example of a fully equipped warrior.

Each item will provide the warrior with a variety of skills, stat boosts, and passive abilities. A skill is essentially an attack or a spell, usually dealing damage to the opponent. However, it could also be used to heal the user, debuff the opponent, and give stat boosts during the battle. Others will grant passive abilities such as boosting the user's intelligence stat at the beginning of the battle.

Warriors naturally recharge 100 health and 1 charge every 5 minutes. Warrior's health and charges can be recharged any time with various items. Wax Fangs and Tiger's Eye Dew must be used from your Inventory.

While each user could have many active warriors, only one will be able to join the tourney. The tourney can be found under the Town Hall tab. The tourney involves typical warrior battles (PvE) and duels (PvP). 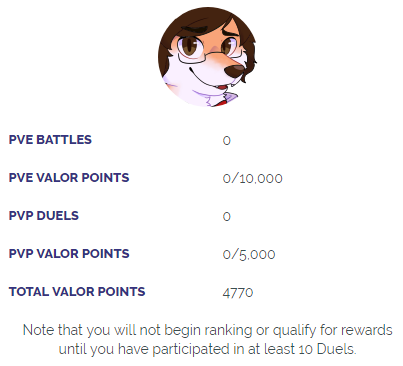 A villager participating in the tourney.

Each battle will give you valor points. You will gain 5 points per defeated monster in PvE and from losing a PvP match, and 25 points from winning a PvP match. PvE battles have a cap of 10,000 points, while PvP battles have a cap of 5,000 points. Once you've participate in 10 PvP duels, you will be eligible to receive 1,000 points after the tourney ends, which is usually on the first day of the month and the fifteenth day of the month.

You can use these points to buy items from the tourney shop, including equipments, schemas, and other warrior-related items. Some items are exclusive to the tourney shop.

Besides finding loot unobtainable elsewhere, one of the primary reasons to have a warrior is to boost your village's Protection Quotient (PQ). The quotient is the ratio of active warriors to warrior victories over a two-hour period, with the ideal value being 5 - that means if every warrior wins 5 battles every two hours, the village is safe. If the quotient falls below this ideal number, the village falls under attack, which halves warrior damage and yields, and doubles crafting times.

Because of the Protection Quotient, it is best to have your warrior switch to another career if you will not be playing for the next two hours. Since health and combat charge regeneration continues even if you switch, and careers can be switched every two hours, there are no disadvantages to this method of increasing the PQ. While you can choose any career, if you choose Blacksmith, you can unequip your weapons and have your villager repair them during their 'downtime' from being a warrior.

Retrieved from "https://furvilla.fandom.com/wiki/Warrior?oldid=28264"
Community content is available under CC-BY-SA unless otherwise noted.