"This sky castle was said to be home to angels and is overseen by the Mayor of Quetzal Palace, Ana, who is the leader of the guardian angels. She assigns each citizen a guardian for protection."[1]

Quetzal Palace is one of the five Villages in the Furvilla world. It has an angelic sky theme, with classical Grecian elements.

The tailors in this village are able to make the Galaxy Costume, the Angelic Costume, and the Fairy Costume.

Its mayor is an angelic wolf named Ana. 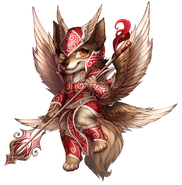 Equipment associated with Quetzal Palace have the Fire element. As well as the always available equipment that can be bought and crafted in Quetzal Palace, equipment is also released as a part of Quetzal events.

Quetzal Palace seeds can only be found by Quetzal Explorers. The plants can be grown by any Herbalist.

The Doctor career can craft medicines which were designed to heal specific illnesses. Medicine does not currently have a use aside from being quest items, however, as sicknesses do not currently occur. Medicines require the container item, town-specific plants, and FC to create.

There are animals native to Quetzal Palace, meaning they can be bought from the village minipet shop, or collected using the Animal Husbandry career. Each species has 4 colorations depending on the rarity.

Retrieved from "https://furvilla.fandom.com/wiki/Quetzal_Palace?oldid=27148"
Community content is available under CC-BY-SA unless otherwise noted.