The Graffiti Costume is one of three guest artist Costumes that were released together. It can be crafted by Tailors who know the Graffiti Pattern Book. Graffiti's artwork was done by JagBull.

It takes 90 minutes to craft a Graffiti Costume. 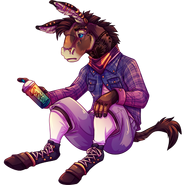 Graffiti Chicken
Add a photo to this gallery

The PSD files for these bases can be found here.

Retrieved from "https://furvilla.fandom.com/wiki/Graffiti_Costume?oldid=28145"
Community content is available under CC-BY-SA unless otherwise noted.