Equipment is used by Warriors to defend themselves from Monsters and to duel with other combatants. There are several different types of equipment a warrior can equip. The only way for warriors to increases their stats is by using equipment, as levels only increase health.

For information on combat and combat mechanics, please visit the warrior page.

Beginner weapons, shields and armor can be bought in your Village's battle store. The equipment sold there is weak but very affordable. A warrior will be able to find upgrades as they slay Wandering Monsters. As they level up, they'll be able to access more battlegrounds that drop more powerful equipment.
Be on the lookout for Warrior event battlegrounds. Event-only enemies may be difficult but usually have a rare chance to drop powerful equipment, or other limited items, that can't be found normally.

Not only can warriors find equipment but Blacksmiths, Crafters and Tailors can also craft them. Some of these items can only be obtained through crafting and are quite powerful. Alchemists can even make some of the most powerful equipment in the game.

Lastly, during Exploration Events, normal equipment and player commissioned equipment can rarely be found, depending on which explorer event path you're taking.

Potency, also known as Grade, is the percent value at the end of an equipment item's name. The base value for all equipment is 100%, which means it has its base damage and stats. If an item's potency is higher than 100% then its damage and stats will be that much higher. Damage, Mitigation and Resists are the most easily affected as they're generally high numbers. Other stats like Strength and Speed require much higher potency until they start increasing. 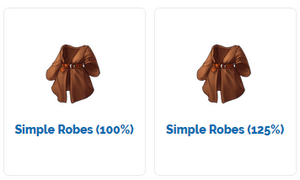 For balance purposes, not only will stats like Strength increase but negative stats will also increase with higher potency. This means when a +4 Strength becomes +5, a -4 Speed on the same equipment will also become -5.

Generally, when a piece of equipment drops in a battleground, its potency will either be 100% or higher. This isn't the case for when a Villager crafts equipment, as the item's potency will depend on the Villager's skill and a little luck. Having too low of potency on an item will actually lower or even entirely remove stats. This is true for both positive and negative stats, meaning that a +1 and a -1 could both be removed.


How do I increase an item's Potency?

There are currently several ways to increase an item's potency. The first way is to Trade with the NPC-Traveler. This NPC will increase your equipment's potency at a price. The Traveler's thread can be found on the Item Sales section of the forums, at the very top of the page. On that thread you can find what they're currently charging for specific upgrades. Currently you need Item Upgrade Tickets, which can be found at the Tourney Shop, along with a lot of furcoins. The Traveler can be quite busy at times, don't worry if they don't respond to your trade request quickly. It can take several hours or even days for them to respond.

Another, much faster, option is to use Upgraders. These items can be crafted by blacksmiths and can instantly raise the potency of a piece of equipment. These include:

There are also consumables only obtainable from events that raise potency. These include:

Raising Frost Volley Amulet's potency will not increase its base damage.

The exception to this rule are a select few items, each of these will deal more damage with higher potency even though they don't have any visible damage. This is because they each use single-hit Earth Damage (or some form of it).

Not every piece of equipment has a chance to be socketed, but when they are you'll see a small number at the end of the item's name surrounded in brackets, like this [1]. This number means the item can be socketed with a Crystal. The higher the number, the more crystals you can socket onto that item. Crystals can increase a piece of equipment's damage, stats or even give them passive abilities. It's currently not possible to slot multiples of the same crystal onto a single item. Crystals can be safely removed and placed back into your inventory using a Crystal Remover. 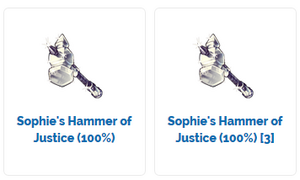 How do I increase an item's number of Sockets?

Just like potency, the NPC-Traveler can also add sockets to an item of yours at a price. You can find his thread in the Item Sales section of the forums.

Sockets may also be added through items called Socket-O-Matics. They can be created by crafters and add a single socket to a piece of equipment when used. These include:

Retrieved from "https://furvilla.fandom.com/wiki/Equipment?oldid=28642"
Community content is available under CC-BY-SA unless otherwise noted.